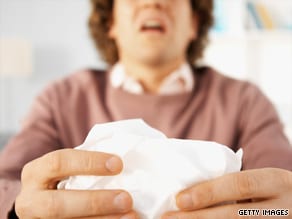 With the soon arrival of fall comes the increase in allergens in the air causing what has come to be known as “hay fever”. Some folks have allergies so badly they spend most of their time indoors just to escape. But what about pesky dust mites—those puppies are always lurking! So where do you escape?

To combat the dusty indoors, many people will install a product which has traditionally been believed to thwart dust i.e. wood, marble, tile, etc. However, an interesting phenomenon occurred in Sweden when citizens started “deselecting” carpet as a choice for flooring in 1975, where there were just under a million claiming allergic reactions. By 1990, a report was made that found that number had increased to just over three million. The market showed that carpet use dropped from 40% in the mid 70’s to only 2% in 1992.

Here’s where it gets interesting (for those of you who hate reading stats). Even though the carpet had been deselected and removed down to only 2% of the homes in Sweden, the allergies did not decrease. In fact, this bold and brazen act of prejudice against carpet fibers did nothing to improve conditions for those allergic patients! How do you explain that!?

I’m glad you asked. Dr. Allan Hedge of Cornell University “actually found that carpet can improve indoor air quality by trapping allergens.” (Of course, that is assuming the consumer keeps their carpet clean on a regular basis and dry after any carpet cleaning process.) He found that dust and allergens are actually “stirred up” every time an air flow is increased on the floor like someone walking through a room, an air conditioner kicking on (which allergy sufferers prefer), a fan blowing, or heating unit and then virtually “re-suspends them in the breathing zone.”

So what does carpet do, then? Dr. Hedge points out that “the carpet traps the dust particles and allergens, thus preventing them from being re-suspended into the breathing zone and making carpet a BETTER product (yes, he said BETTER) for persons with asthma and allergies.

“So what about harmful chemicals in carpet?” you ask. There’s an answer for that, as well. According to Frank Hurd in an article written in Tuft Talk, April 2012, “Since the 1990’s the carpet industry has created the Green Label Program which evaluates all potential emissions after the carpet has been installed for 24 hours and certifies products that release half or fewer of the emissions considered safe.” The new carpet smell is “4PCH”, a byproduct of latex used in bonding the carpet components together. Hurd says, “the level of off-gassing from carpet is too low to elicit irritant responses and, hence, too low to act as a trigger for asthma.” He suggests “airing out” the home upon installing new carpet to allow the gasses to disseminate, since it is a very “short-lived emission”, which should disappear quickly.

So, allergy sufferers, good news! You CAN enjoy carpet. You don’t have to endure hardwoods if you really enjoy that lush, plush feeling of carpet under your 10 piggies. See us at Interior Surface and we can help you pick out a beauty of a carpet (or hardwoods or tile or any surface)!